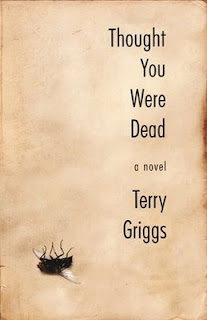 The new Terry Griggs novel Thought You Were Dead (Biblioasis, 2009) is described across the blogosphere as a mystery, but I think it's a satire. A satire of what, though?

Also online: a "trailer" for the book; a profile of the author; an essay by Griggs on flies; a report on the book launch; an interview with the author; the innovative Revenge Lit contest the publisher dreamed up to help promote the novel.

The plot (the least interesting part of the book):

Set in contemporary small town Ontario, the action revolves around the erudite but perpetually under-employed Chellis Beith. Abandoned as a child by his mother and taken in by a local family, Beith finds himself in the unlikely occupation of literary researcher. His employer, Athena Havlock, an older woman and famous novelist, swears him to secrecy and sends him on odd missions of information dumpster diving. Meanwhile, Beith's true love, Elaine Champion, a slighly sadistic odd-ball inventor, has married a yuppie and imitates the bland upper-middle-class lifestyle she is clearly ill-suited for.

Yes, there is a murder, too. But though the murder is referenced in the opening pages, it isn't what kicks off the action. This isn't a whodunnit. The relevance of the murder is only made clear towards the end of the novel. In the meantime, much delightful mayhem has ensued.

The London Free Press review called it "cheerfully insane." The Hamilton Spectator review warned the book is "so screechingly funny and impossibly glib that you sometimes have to give your head a shake and remind yourself: Serious up! There's evil afoot!"

Satire, of course, is where the serious and the humourous join together.

To write this review, I wanted to provide at least one link to a relatively recent summary of satire in Canadian literature. I didn't find any. You can find the results of my quest here.

I also looked for a quote that in my memory is linked to Lynn Coady, who I believe once complained that the only Canadian writer allowed to be funny was Mordecai Richler. (I tried to source this, but Google turned up nothing; I remember it as possibly appearing in This Magazine).

The career of Terry Griggs might serve as further proof of Coady's thesis. Or as one person advised when I was researching satire in Canadian literature: "try Earnestness and Canadian Literature for a much richer source list."

In fact, there is a long, rich history of humour and satire in Canadian literature; the popular imagination, however, resists acknowledging it. Greater minds than mine will need to explain why.

The most current and comprehensive summary of "Humour and Satire in Canadian Literature" that I could find was by UNB professor Jennifer Andrews and appeared in Encyclopedia of Literature in Canada (U of T Press, 2002). I can't say that I recommend it.

While it provides an extensive review of humour and satire in writing based in Canada from the pre-contact First Nations through to Dany Laferriere, it also manages to leave out Lynn Coady, Douglas Glover, Mark Anthony Jarman, John Metcalf, Stuart Ross, Tony Burgess and, incredibly, Leon Rooke, among others, including Terry Griggs.

Shaun Smith, however, in a 2002 review in Quill and Quire of TG's Rogues' Wedding (Random House), had no trouble identifying the genre and finding much to admire:

Iconoclasm lies at the heart of the novel. The closer you look at things – bugs, the sexes, social customs – the less familiar they become, until they no longer resemble themselves at all. For Griggs, every strange world is a portal into another equally strange one. With astonishing talent and control, she smashes apart Victorian society (and modern society by extension) and rebuilds it as a Swiftian fantasy, as raucous as Huckleberry Finn and almost as bizarre as Alice in Wonderland.

This is a rich mixture, intensely intoxicating and bestowing delicious feelings of hallucination. Farce and satire elevate to a kind of surrealism or Dadaism. Bugs mysteriously emerge from people’s mouths; pretty girls vanish through doorways never to be seen again; a crow dons a baby’s bonnet; a woman wears a trout on a ribbon around her neck. Like a labyrinth of words, a cipher of images, the novel defies one to look away, because its reality is redrawn (in distinctly feminist form) with every letter.

In fact, Smith later reviewed Douglas Glover's Elle (Goose Lane, 2003), which went on to win the GG, and found it wanting against the earlier Griggs novel.

But all of this is taking us away from the latest title.

If it's a satire, what is it satirizing?

General stupidity, is my guess.

Chellis is far worse off than Elaine, however, because he is Elaine's victim. He loves her, and she won't love him back. Chellis is worse off than anyone else in the book, in fact, apart from the dead guy who never really comes into focus. Chellis is so put-upon, he resembles one of Martin Amis's many male protagonists: he is unable to move his own life forward without coming to some accommodation with women.

Amis on his men: "They don't want to be obeyed particularly. They just want to be fancied. And, of course, they are looking for love."

Chellis has no expectation of being obeyed. He's simply grateful for whatever crumb comes his way. His mother abandoned him. His adoptive mother is dead. His employer is highly controlling and abusive. His love-object married someone else and yet still maintains a come-here-go-away friendship with him. Later, his long-lost "sister" appears and so does someone claiming to be his mother. Chellis has no other prospects of work or fate, except those offered to him or identified for him by women.

Is this a satire about the useless male? Or a comment about domineering women?

Alex Good called the book "a parody of the traditional village mystery." But he also identified the book as satire and suggested some of its targets:

Griggs hasn't written a puzzle book that invites the reader to pick up clues and figure out whodunit. Instead she has opted for a more general satire, not only of the mystery genre but the world of CanLit in general. One imagines Farclas to be somewhere in Alice Munro country, and when Chellis drives through "this dingier, ungroomed stretch of the province" with its immense fields sectioned into "deep squares of swishing yellow plant matter," he sees in its run-down streets the very source of its "literary gothic reputation." And if this is the source of so much of our literary culture, at the other end retail receives no kinder treatment. One particularly acid scene has Chellis and Elaine going to the mall and visiting a big box bookstore furnished with shelves of books for Dummies and staff who think Tolstoy is a Canadian author.

It is also interesting to note that Amis cloaked his early satires in so-called crime writing. An essay online by Brian Finney provides some exposition on this subject.

The bottom line, I suppose, is that Griggs has written a good book.

It's exceptionally clever, very funny, sharply intelligent. As many critics have been saying about Griggs for a long time now, she is someone who deserves to win major prizes in this country. Her readership deserves to grow. Everyone who enjoys vigorous prose should scrurry to the nearest big box retail outlet and harrass the teenagers at the counter for a box of Griggs asap.

One of the funniest things in this book is its ending: I don't want to give it away, but you'll get it, I'm sure, if I say ... maybe the satire is really a comedy, or a romance.

For those interested, I point out this essay by Philip Marchand: Terry Griggs and Barbara Gowdy: The Catholic versus the Protestant Imagination (Ripostes; Porcupine's Quill, 2000). Griggs is cited as Catholic, Gowdy as Protestant.

Here's one of my favourite passages from Thought You Were Dead:

No wonder Hunt was putting on the pounds these days. He never ate at home, and Chellis had discovered why. His first mistake had been accepting Moe's invitation to lunch, instead of inviting her out to eat. She could have picked censoriously at her fast food while he picked her brain, and the drinks bill wouldn't have mounted stupendously if he were paying. At her place, during the pre-luncheon period, which was comparable in length to the Precambrian, Chellis had slowly, slowwwly but surely gotten plastered. Not only had he dislocated his head (lost it!) knocking back tumblers of grappa, but he had the quesy impression that somewhere along the line, assured of the health benefits of the Medditerranean diet, he'd knocked back a bottle of extra virgin olive oil as well. Lunch, when it finally arrived, resembled molten Shrek on a plate. Offering it a pension seemed more appropriate than saying grace. At least the meal had been colour-coordinated with Moe's necrological chatter. He'd had no idea that she was such a ghoul.
Posted by Michael Bryson at 10:24 AM