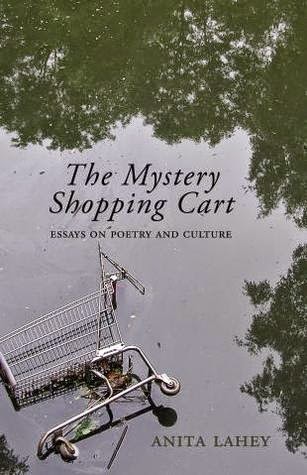 This book is subtitled "Essays on Poetry and Culture," which is sort of true, but there is enough variety in this collection of literary non-fiction to also make it untrue.

The middle section includes a number of interviews, for example, one with Alice Munro about on one particular short story.

The title also comes from a remembrance piece, a eulogy, which is touching and poignant.

Then at the end of the book is an extended - and excellent - essay on eulogies.

Which is to say, there is much more than poetry addressed here, and to sum up the rest as "culture" is misleading.

But what a quibble!

Instead let me sum up this book by praising Anita Lahey for her calm, cool erudition and for sharing her evident passion for Canadian letters, both recent and in the deeper past. We get considerations of P.K. Page and Gwendolyn MacEwan. We get an interview with John Barton and Stephanie Bolster. We get Alice Munro. And much more.

Lahey avoids the poetry wars, only saying at one point she like reviewers to take a stand. Don't be boring! Lahey is not boring, but her tone is often detached, ruminative. Her deep dive into the eulogy as a form is no accident. She has a reflective mind and a curious one. The mystery of the shopping cart is, therefore, an appropriate title image.

There is an oddness in the every day and Lahey is determined to contemplate it.
Posted by Michael Bryson at 4:50 PM No comments: 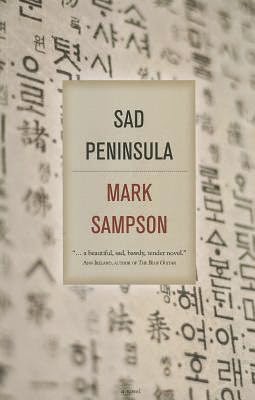 I participated in a literary reading series in 2010, and Mark read from his manuscript in progress, which later became Sad Peninsula (Dundurn, 2014).

The sad peninsula is Korea, and the story cleverly riffs on John Donne's famous line, "No man is an island," noting on a peninsula you are always connected to something larger.

Connection and its challenges is a theme deeply engrained in the two main stories that alternate chapters in the novel. In one, the first-person narrator, Michael, tells of his two plus years in Korea as an English teacher. He eschews the dance clubs and fast sex chased by many of his North American colleagues and instead recounts his slow moving romance with a young professional Korean woman, Jin. They bond initially over a common admiration for the work of Milan Kundera.

The second story reaches back in history to tell the story of a teenaged girl taken from Korea by the Japanese military during the Second World War. She becomes one of many "comfort women," who exist in stalls in compounds to be raped by Japanese soldiers upwards of 35 times a day, day after day. According to Wikipedia, "Estimates vary as to how many women were involved, with numbers ranging from as low as 20,000 to as high as 360,000 to 410,000."

Spoiler alert. Ultimately, the two stories converge. It is Jin's great aunt who was forced into sex slavery.

But there's more than this neat narrative hookup that connects the parallel stories. For one thing, the entire novel is saturated with sex, from the extreme torture of multiple rape, to the casual pickup culture of the dance clubs, to the slow burn sexuality of Jin and Michael as they date for months and months before consumating their forbidden love.

Forbidden? Not really, but the tension between the modern and the traditional is never far away. And here, of course, is where Korea is struggling with its soul. What to be? Which is the second thing that connects the two narratives. Before WWII, Korea was a colony of Imperial Japan, and its identity was weak. Following WWII, Korea was divided between the West and the Communists. After the Korean War, the South is strongly aligned with the USA and implements a ferocious capitalism. The modern and the traditional, at the macro and micro levels, struggle to co-exist, caught in an endless feedback loop.

As narrator, how much of this does Michael understand? He is smart, sensitive, caring, alert, but also sometimes in over his head. Jin brings him into her life, into her family, tells him things she has told no other, but - spoiler alert - ultimately decides she cannot stay with him: "I need to be Korean."

The reader can only wonder what she means by this. She is approaching thirty, and she tells Michael she will never marry because she has had relations with too many men. She is laden with shame. This is the third thing that connects the two stories, because shame is what burden's Jin's great aunt, though - it must be noted - she does find a husband following the war, and she has a complicated marriage that fails. Eun-young's experience is extreme, yet Jin says she is caught in the same tide of cultural expectation and control ... a control she chooses to remain tied to (she decides not to go to Canada with Michael when he returns home).

Sad? For Michael, yes. For the reader, sure. For Jin, who knows. One wonders what will become of her. Will her retrenchment into a cultural nationalism make her life happier, more meaningful? Or is she just repeating the errors of her family, her mother in particular?

Interestingly, it is Eun-young, the one who is most broken, most alienated, who moves farthest to reconciliation at the end of the novel. She visits, finally, the institution set up in Seoul to house aging comfort women, a place that includes a museum and the thing that Eun-young had been lacking all of her adult life, community. On a peninsula, you are always connected to something larger than yourself.
Posted by Michael Bryson at 12:36 PM No comments: