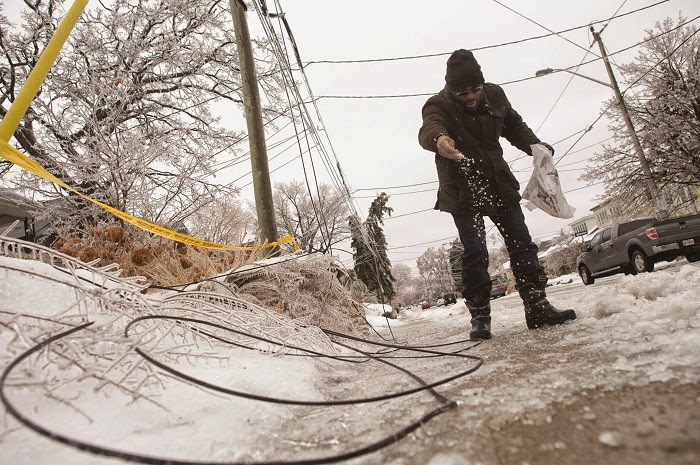 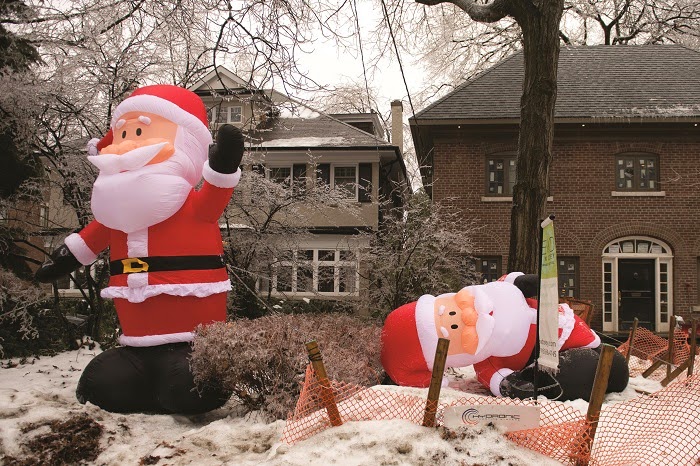 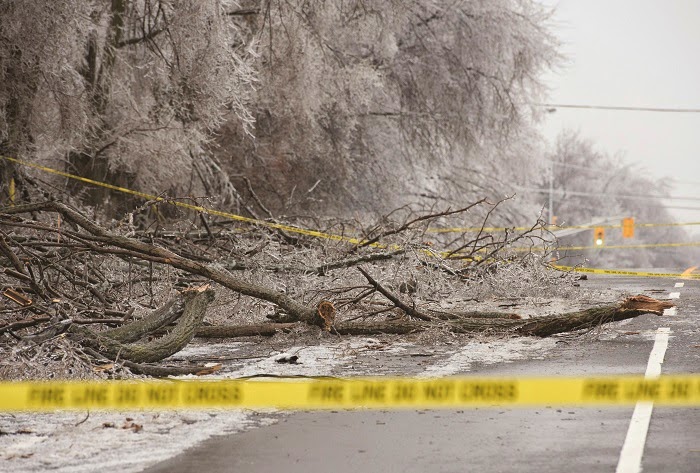 Three days before Christmas, 2013, the power went out as an ice storm hit southern Ontario. The story of the month that followed is captured in Ice Storm Ontario 2013 (ECW, 2014).

Subtitled The Beauty, the Devastation, the Aftermath, this book of Toronto Star photographs tells the city's tale of woe.

There's even a pic of Mayor Rob Ford getting chewed out by residents. Why won't you declare an emergency?!

There's a photograph of a wet fox scampering between towers of ice.

There's a photograph of a dude in Mississauga chopping wood and a notation that he may be the last person in Ontario to have his power reconnected. He was chopping wood a month after the ice storm hit, still waiting for hydro to reconnect juice to his house.

There is no photograph of my in-laws making tea on my front porch using my camping equipment. Tea! First! Okay, tea made, now ... what's your plan about what we do next? Ah, the English!

A portion of the sale proceeds of this book will be donated to The Toronto Star Fresh Air Fund.

What can one say about this book? Nice pictures. Um, no narrative. Just what's on the cover flap and in the cut lines.

The most compelling news I read accompanied piles of iced branches. Toronto's tree canopy will take decades to recover. Perhaps that is the take away. The trees. Even five months later, there are still piles of branches about, torn limbs visible, concern for our city forest still top of mind. When had we ever spared so many collective thoughts for our trees?

Another take away should be noted, because this week is Emergency Management Preparedness Week in Ontario.

Ice Storm 2013 is the only time I used my pre-packed candles and emergency water supply. And I was extra glad to have a supply of propane for my camping stove. And tea!

Three days supply of stuff is what is recommended. It wouldn't have been enough for the dude in Mississauga ... or many others ... but better than nothing.

I'm sure many folks have photographs as stunning as many of those included in this book, but the book shows the context across the city and across the weeks of the aftermath.

Not exactly a stocking stuffer, this book will none-the-less remind you that disaster is one freezing rain storm away. Thank God it's almost summer!

Posted by Michael Bryson at 9:35 PM No comments: