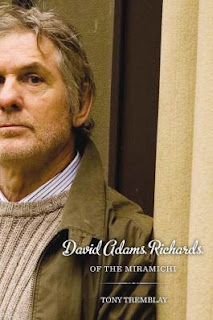 This past weekend, I finished reading David Adams Richards of the Miramichi: A Biographical Introduction by Tony Tremblay (UTP, 2010). The Globe and Mail also reported (Sept 4, 2010):

... some prominent economists and policy makers are now suggesting the real problem [with the economy] isn't lack of consumer spending - it's that the unemployed don't have the right skills to fill the jobs that are open.
These people are now theorizing that the financial crisis has altered the structure of the U.S. labour market, perhaps permanently (print edition, B1).

The connection between the Richards biography and the Globe's report on the U.S. economy is this: Tremblay's portrait of Richards returns again and again to Richards' fury at how "liberalism" forced change on the lives who lived in New Brunswick, particularly those who lived along the Miramichi River (and particularly in the 1960s and 70s).

The "structure" of the economy changed and established ways of being and living fell away. The two paragraphs from the Globe a similar story - and suggest Richards' charting of the stresses of economic transformation on the working poor could well be an anthem of our time.

Ironically, however, his work has often been marginalized as "regional" in focus. If the U.S. economy is just another "region" now in our multipolar world, then Richards' work deserves the label "universal."

A confession. I haven't read any of Richards' novels. Tremblay's biographical introduction introduced Richards' work to me - but readers familiar with Richards' work will learn much, too. From the historical sweep of the Miramichi region going back to the first European settlers, to the portraint of multiple generations of Richards' family, to the articulation of the literary politics of New Brunswick and Canada during the early years of Richards' career, this book has much to recommend it.

Tremblay ends his biography in 1989, with Richards' first GG win (for Nights Below Station Street), which culminates all of the hard work, struggle and ambition Richards committed to his literary career up to that point. That moment, however, from the point of view of 2010, is about the midway mark of Richards' publishing history, so there is much biography left untold (though Tremblay draws heavily on Richards' nonfiction of recent years to ground his arguments about Richards' literary methods and motivations).

One of those later nonfiction books is God Is: My Search for Faith in a Secular World (Doubleday, 2009). (G&M review here.) Tremblay, repeatedly,  makes it clear the extent of (conservative) Catholicism's influence on Richards. "Like Dostoevsky," Tremblay writes, "Richards felt that the best alternative to ... bourgeois liberalism was a form of Christian autocracy" (267). A wry smile came to my lips, therefore,  as the book ended recounting Premier Frank McKenna's party for Richards' GG win. McKenna's liberal economic transformation of New Brunswick was grounded by the kind of "intellectual" "theoritical" "philosophizing" Richards "instinctively" despised (quotations mine).

In the early 1980s, Tremblay tells us, "Richards was becoming increasingly reactionary" (283); he believed in "the ethical superiority of spontaneous action over calculated intent, which is always more ideologically laden" (313).

Myself, I don't believe this latter conclusion holds water. Isn't spontaneous action likely to be driven by unspoken, unconscious, unarticulated "ideological intents"? Isn't it better to speak about what's behind the motivation, while also confessing to the imperfect nature and/or understanding of the motivation?

Richards' fiction is strengthened by his generous empathy, particularly for those with lesser than the rest; it also rests on the Catholic conclusion about the unknowability of the human heart. His fury at social workers and other "liberal" "socially progressive" theories and economic/government programs and strategies comes from the same place. You can't help people, he might say, by telling them that they must change who they are. Social work, in this view, is fundamentally un-Christian (or un-Catholic, in some interpretations, at least).

But what about the novels? Are they really about economic philosophy?

No. Tremblay suggests no such limit. In fact, he provides much close reading of Richards' early work, focusing on the characters, their immediate needs and actions. He quotes Richards repeatedly on the author's "love" for his characters and his desire that his readers feel the same. Again, it is hard not to think of Christ the Shepherd, caring for his flock, each unique, each desired, each protected within the fold no matter what.

Tremblay's spirited reading of Richards' early work makes a strong case for its ongoing significance, if not appeal. Perhaps his "introduction" will lead to other reassessments of Richards' output. The economic shocks of the 21st century have arguably only added to the relevance of Richards' vision. Liberalism, it is always worth reminding ourselves, doesn't lead to perfection (nor does any other political philosophy). And critiques of modernism that defend the value of the individual are always valuable.

Are the novels themselves any good? I'm now motivated to find out for myself.