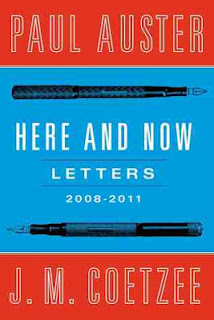 When I was reading this, I found it compelling. I wanted to keep going, find out how it "ended," but it (of course) never really ended. It just ended. It had, a la Julian Barnes, the sense of an ending.

As I was reading it, I liked it. Upon reflection, not so much.

My disappointments outnumber my pleasure points. As such, dear book, I think we should break up. It's probably me, not you, but this is a review of you.

Thus, I had admiration for each of these authors before I read their correspondence, yet my admiration for them is diminished, not amplified, by seeing them all up close and personal.

Why so much discussion of sports? Why so clueless about the 2008 economic collapse? Why so little disagreement or pressing of the other into greater unknowns?

I wish now to read a similar correspondence between Carver and Bartheme, or Didion and Sontag. Pierre Trudeau and Brian Mulroney. The genre has possibilities that have been only faintly outlined here.

Coetzee plays the pessimist to Auster's optimist. This gives them a point of conflict but it's also cliche. Auster is the bubbling American, ever hopeful, and Coetzee is old-world rogue, confirmed in his near-cynicism by perpetual disaster.

These tropes play to neither author's advantage. Ultimately I felt that too many opportunities of interest were lost. Coetzee is reflecting on mortality (his own) and "late style". He makes some general observations and Auster offers a series of examples that contradict Coetzee's drift, but the topic is not run to ground.

This book is superficial! That is my conclusion, though it surprises me to say so. Neither of these men is superficial, and their work is full of complexity, but I wanted more from their interaction.

It just is what it is. Play it again, Lenny Bruce.
Posted by Michael Bryson at 4:49 PM No comments: