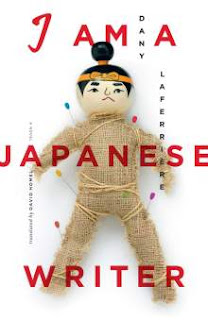 I am a Japanese Writer
by Dany Laferrière
Douglas & MacIntyre, 2010
Translated by David Homel

Not my first post about Laferrière, but this is the first book I've read by this Haitian-born Montrealler in probably a decade.

On the one hand, the conceit is apparent from the cover. The writer is not Japanese; we are going to encounter in these pages play with or about identity.

Imagine for a moment the title: I am a Canadian Writer. Would it carry the same disquiet? Laferrière is, after all, a Canadian writer.

How about, I am a Quebecois Writer?

From the second to last page:

I certainly don't believe in the peasant, who is often racist, nor in popular culture, which is always reactionary (Mishima is the perfect example of the writer falling into the trap of "pure" identity). But Basho -- Basho amuses me.

An exchange from earlier in the book:

"There is no book -- that's what I've been explaining to everyone."

"That doesn't matter. They're completely obsessed with identity, I'm telling you."

"I don't give a shit about identity."

"So you say, but then you write a book with a title like that. What does it mean?"

"It means I did it to get away from the whole business, to show that borders have disappeared. I was tired of cultural nationalism. Who says I can't be a Japanese writer? No one."

The plot, such as it is, is of a writer (first person) who is writing a book called I am a Japanese Writer. He is a Haitan-born Montrealer. He is living in rented digs in the same district where Laferrière set his first book How to Make Love to a Negro (Without Getting Tired), over two decades ago. There is no book, as the narrator explains above, but there is a book. You are reading it. You have it in your hands.

Ah, Laferrière. It's nice to be back inside your pages. You are sly and always welcome.

Various reviews of the book on the D&M website.

I like this summation best, from the Telegraph Journal (October 16, 2010):

“[I am a Japanese Writer] is all about place and identity, names and nationality and the paradoxical relationship between rigid lines of nationalism and the fluidity of the individual. Episodic and picaresque, it is a humorous look at identity and nationality, writing and the mind of a writer...This is a deceptively painless read, when really it's a complex, multi-faceted look at race, identity, art and culture.”


http://thenewcanlit.blogspot.com/
Posted by Michael Bryson at 10:29 PM No comments:

Not the usual fare around here, but I just saw this movie on Rogers on Demand and it expresses so much I never thought I'd see expressed. Especially on film.

So well done. So fantastic.

Inshallah, dudes. Rock on.
Posted by Michael Bryson at 11:49 PM No comments: 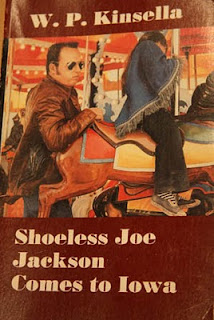 The Mountie at Niagara Falls
by Salvatore Difalco
Anvil, 2010

I picked up the Kinsella book at a used book store on Bloor Street late in 2010. (Yes, there's at least one left.) This book is now 31 years old. Holy, Jesus. What blasphemy and all that.

I read Kinsella's "The Thrill of the Grass" in an Oxford anthology edited by Robert Weaver in, eeks, grade 13 in 1987. It was about Shoeless Joe, too, I thought, until I dug up that old anthology and realized it wasn't. But Shoeless Joe, and "if you build it, he will come," was the name of Kinsella's novel (1982) that became "Field of Dreams" (1989), starring Kevin Kostner.

I read Shoeless Joe, too, years ago and enjoyed it. I liked that Kinsella wrote Salinger into it, and I was interested to read Kinsella's recent comments about that online in Macleans: the movie producers' feeling was that "only 15 per cent of the movie-goers would have any idea who Salinger was anyway."

But back to the stories. There wasn't much risk in picking up this early Kinsella for $2.95, but there was a lot of reward. Yes, it was effen good. The title story is canonical, and at least half the collection is simply excellent. The rest is merely effen good.

Salvatore Difalco's The Mountie at Niagara Falls (Anvil, 2010) has more stories in it than I can count. More than 100 in 142 pages. They are intense narrative chunks, full of incident, frequently spliced with zingers and twists, emboldended with absurdity, on occasion sad. It's the full-meal deal, rapid fire. I don't know what to compare it to, except John Lennon and Spike Milligan.

The story "Peameal Bacon" killed me. The narrator meets a woman at a party. She's a "colonic hydrotherapist." She explains what this means. Quote: "She explained that over twenty gallons of fluid would be flushed through my system. I thought about that at some length. Nice to know that there are cures for being full of shit."

In 2010, the Journey Prize was at it again, promoting "the best of Canada's new writers." This year's selection is edited by Pasha Malla, Joan Thomas and Alissa York, and I have no dispute with their picks, chosen from short stories initially published in small, literary magazines. The Journey Prize, of course, includes a $10,000 cheque to the best of the best.

Money aside, congratulations to the Vancouver Review. Two of the most remarkable stories here (in my opinion) were initially published there: Danielle Egan's "Publicity" and Andrew Boden's "Confluence of Spoors." Krista Foss's "The Longitude of Okay" was excellent, as was Lynn Kutsukake's "Mating," Mike Spry's "Five Pounds Short and Apologies to Nelson Algren," and Andrew MacDonald's "Eat Fist."

I've just listed exactly half of the anthology, which shows how I'm struggling to limit the good good from the merely good. The best work, to my taste, pushes beyond the boundaries of the "real" into the wild, unknown and unmappable beyond. "Publicity" blew me away. It nearly defies summary. Told from the point of view of an author on a book tour in 2020 (or thereabouts), the story focuses on his visit to Vancouver, his relationship with his publicity assistant, and his desire to swim in the (now fatally toxic?) ocean. What isn't going on in this story? I was humbled. Wow. Fantastic.

There is much else to praise in the collection, and I could be snippy about a few things, too, but I won't. Congratulations to everyone included.

Short stories. Lots of life left in the old form yet.