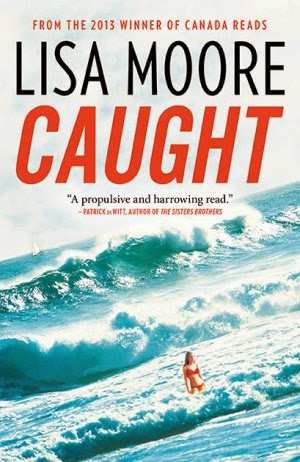 I wrote at the end of last summer, and it was just published in #90 of Canadian Notes and Queries.

Please check out the magazine, and send them funds to cover an annual subscription - from now until the end of time.

I reviewed Moore's novel February in 2009 on this blog.
*

Fifteen months ago I was sitting outside Sunnybrook General Hospital in Toronto with my wife. She was in a wheelchair. She had just had a chemotherapy treatment, her last. She was in a wheelchair because her breast cancer had spread to her liver and then her bones. Her T1 vertebrae fractured. She took a series of high powered pain killers and that day was streaming hydromorphine (seven times more powerful than morphine) into her abdomen through a catheter. She could stand, but barely walk. The chemotherapy was for a resurgence of cancer in her liver. It was a last ditch effort to extend, not save, her life, however briefly. Before the chemotherapy, Kate had pulled up her blood results from that morning on her ipad (yay, e-health). They were not good. The one number we’d been told to watch, that we were hoping was at least stable from a week earlier, that we were hoping most of all would go down, had doubled.

“Do you want to go through with the chemo?” I asked.

She had the treatment, then I wheeled her out into the sunshine and called the private ambulance company I’d hired to transport her that day. I have 24 steps from the sidewalk to my front door. Kate couldn’t do it anymore. I needed someone to carry her up the stairs.

It was the last time we were alone together. It was a Friday. She died the following Wednesday.

It was the time to say those things. I can tell you there isn’t much to say at that point, except reiterating love. I said, “I wish this moment would last forever. Just you and me, right here, right now. It’s not the disease that’s the enemy. It’s time.”

We can’t stop tomorrow from coming.

We said some other things. It was a lovely moment. A grain of sand in the ocean of time.

Lisa Moore’s fiction, all of it, is full of such moments. She is an expert at stopping the clock and forcing the reader to focus on the intense swirl of details locked into an instant.

In a review of Moore’s Giller-nominated short story collection, Open (Anansi, 2002), I wrote: “Moore's stories are fragmented like memories. They have a coherence from beginning to end, but in the middle the reader is often jarred by the sudden, apparently random, thoughts of the characters.”

In a review of Moore’s novel, February (Anansi, 2009), I wrote of what I called “Moore’s genius”: “The structure of time, the implications of time, is perhaps Lisa Moore's primary narrative obsession. ... Moore's style and attention to the details of her character's specifics, focus the reader's attention on the here and now, while also allowing the past and future to resonate.”

Which is to say that I disagree with the pull quote on the cover of Moore’s new novel, Caught (Anansi, 2013). The quote, by Patrick deWitt, calls the new novel, “A propulsive and harrowing read.” Harrowing is okay. Propulsive, however, the novel is surely not.

Nor should it be.

Though let’s first judge a book by its cover. The girl in the red bikini, standing in the big-waved surf, sailboat on the horizon, large red italicized CAUGHT weighing down on the ocean like a primeval sun. Yum. Propulsive. But that’s not what this book is about.

This book is about David Slaney, a 24-year-old convicted drug smuggler, who breaks out of prison after four years on the inside and is on the run on page one. Where is he running? To find his old mate, Brian Hearn, who skipped bail on the original charges and is now living under a false identity and, get this, studying to become an English professor.

The largest part of the book focuses on Slaney’s trek, east to west, as he seeks to meet up with Hearn, who has a new smuggling operation planned, one that doesn’t include getting caught. Slaney’s job will be to lead the operation on the sailboat (see cover), meet up with a militia in South America, trade cash for a whack of marijuana, and slip back up the (west) coast (this time). Millionaires, they will be. Set for life on the lam.

The frame of the plot is high adventure, but for all of the revving of engines, it never picks up speed. Slaney’s journey west is episodic, as Moore deep dives into scene after scene. The writing in these scenes is sharp and intense. As discussed above, Moore is able to stop the clock through an expert use of repetition and a journalistic eye for detail. Like Jeff Wall, she takes miniature moments and blows them up to enormous scale. The scenes are also often highly cinematic.

For example, Slaney stops at a hotel where he trades labour for room and board. On the eve before he’s scheduled to leave, he catches wind that there are police in the building. He doubles back and seeks escape. He travels along a floor that houses guests from a wedding. A door opens and the bride, inside alone, asks him to enter and help zip up her dress. They hear the police pounding on doors along the hallway. Slaney hides and the bride assures the officers that all is well within. Slaney wishes the bride well on her journey, and she wishes him well on his.

“It’s only pot,” is repeated more than once.

To which the refrain is, boys, you knew the risk.

But as the bride story illustrates, Slaney is no gangster. In fact, the arc of the story is more folk tale than novel. Slaney doesn’t go through a transformative learning curve, reaching a climax of confidence that leads to crisis and resolution. He gets batted around like one of Lear’s flies to wanton gods. He’s just a good old boy, never meaning no harm. He’s not even a red neck.

Women, it must be said, love him. He gets laid with rapid frequency.

Is he a kind of idealized boy-man?

Slaney is the one the title refers to. He is the caught one. But he is also the one who is most free. He makes no compromises. He never negotiates his integrity.

He is like Pretty Boy Floyd, except he lives.

Hearn, on the other hand, skips bail, bankrupts his father, lives a notoriously open life for a “most wanted” man. He grew up with Slaney, and they were best buds, but the connection between them is never proven; it is only asserted. Readers will have no trouble understanding the attractiveness of Slaney. Hearn, however, reeks of a slime ball, however well read. Why does Slaney risk it all for this man? Why is it Slaney who is always the one putting himself at the forefront of harm’s way? The questions are never answered satisfactorily.

So let’s get to the end. Spoiler alert. Stop here if you would prefer not to know.

The rendezvous in South America succeeds. Along the Mexican coast, they hit a hurricane, which they are lucky to survive, but the sails are torn to shreds. They need to go into port. They are held by the authorities. The gig is up, surely, except, no, it isn’t, because Hearn’s operation has been infiltrated by the police, and the police want Slaney back in Canada, so they can complete their arrest. Deals are made, and the Mexican’s release the crew and their cargo, and out to sea they go, but they know something is up because a cop talks to the girl and tells her she can get off if she cooperates.

Slaney decides on a bold move. They will reverse course, go through the Panama Canal, and head home, to Newfoundland. This is a brilliant plot twist and it had me riveted, but by this part of the novel Moore had dropped the time pause techniques and only a few pages later Slaney was in handcuffs in the back of a squad car. Hearn got off on a technicality. Slaney did 20 years and in 1998 he gets out and heads back to the Rock to whittle away his days.

He visits the local university and the English Department, which is the new home of Dr. Brian Hearn.

I didn’t like this ending. It came too swiftly. It came because of betrayal, the girl’s. Slaney, as a character, I felt, deserved better. He deserved to at least reach Newfoundland and have a taste of success. One roaring party on the beach, say. I would have held in there for another 100 pages for that, even if he got caught in the morning, hung over and stoned. Instead, he and his mates are swiftly rounded up upon arrival and the prospect of a Grand Finale fizzles, and I closed the book feeling sour and disappointed, despite enjoying most of it and admiring same.

To add insult to injury, Hearn, the bastard, gets to teach iambs to undergraduates.

Posted by Michael Bryson at 10:50 PM No comments: