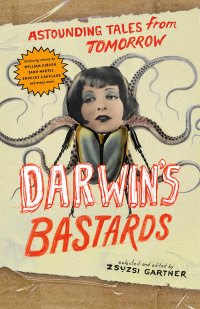 Last spring, I went to the schoolyard to pick up my six-year-old step-daughter from senior kindergarten, this book in hand: Darwin's Barstards: Astounding Tales from Tomorrow, selected and edited by Zsuzsi Gartner (Douglas & McIntryre, 2010).

The kids thought the cover was fantastic. "What is that?!"

The book was the centre of a throng, and witnessing the chatter of the SKs on this subject was a pleasure to behold.

Mutants clearly invigorate the six-year-old mind. Equally, many of the 23 stories collected in this anthology invigorated mine.

Divided into four sections (survivors, lovers, outliers, warriors), this book throws down the gauntlet of what a short fiction anthology in Canada can be.

For one, while all of the authors are Canadian, this isn't a book any high school student could claim in boring. For two, Gartner has achieved that elusive balance, one that has stymied her peers for decades - an anthology that effortlessly blends the literary and the popular, genre fireworks and pointy-headed big ideas.

"There is no time in Waterloo" by Sheila Heti imagines a world in which everyone consults their mother before taking any action. "Mother," however, is metaphor; it's a hand-held device, really. The device predicts the probability of various outcomes. Waterloo, Ontario, is the site of the action. Also the home of RIM and the Perimeter Institute for Theoretical Physics. Princess Avenue, where I spent layabout time in the 1980s and early 1990s, features in a prominent role.

"Survivor" by Douglas Coupland is set in the middle of the Pacific on a tiny island, where the n-th season of the CBS hit reality show "Survivor" is being filmed. Meanwhile, nuclear war ends life elsewhere. The "survivors" are survivors. Outwit, outlast, out play.

"Notes from the womb" by Anosh Irani is narrated by a foetus. The story ends at birth.

"This is not the end my friend" by Adam Lewis Schroeder is set roughly 50 years in the future. The USA has melted down into zombieland. Obsessed with celebrity trivia, it has suffered social collapse. To prevent a similar crisis, the Canadian government has outlawed celebrities and built a barrier between the Great White North and its southern neighbour. The story follows the trip of a musicologist, who is researching "rock stars." Travelling with his neice and nephew, he visits Feist, who is living in a remote location in a trailor.

The introduction by Zsuzsi Gartner is charming, funny and intelligent.

Darwin's Bastards is an anthology for every bookshelf.

Some reviews:
Even a dissenting one:
Other links:

Posted by Michael Bryson at 3:27 PM No comments: 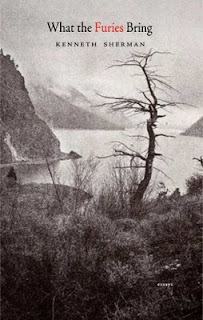 Andre Alexis provoked what amounts to a shit storm in Canadian letters today when he published an essay in the July 2010 issue of the Walrus titled, The Long Decline. What was in decline? The art of literary criticism.

First, I agree that the contemporary art of literary criticism is one or two notches above pathetic.

But, second, I think this is a perpetual state. Good criticism is rare, rare, rare. The quality of criticism doesn't go up and down with the cultural tide. Good critics transcend their contexts.

Northrop Frye, Alexis rightly states, was one of them. The decline of newpaper inches devoted to book reviews, Alexis wrongly states, is not indicative of a decline in criticism. It is indicative of the pressures of international capitalism to be "efficient" and capture the "mass audience."

Yes, we are all nostalgic for The Globe and Mail's book section. However, one only need turn to the robust (online) responses to Alexis's essay to know that his lament for the the loss of "conversation" is premature.

I can't say this captures all the links related to this subject, but here is a generous helping:
Alexis has responded in at least two places that I found:
Gosh, I don't know what all of this brohaha amounts to, but some of it is interesting.

I'm not going to go to the bother of attempting to articulate that "some" here. You may tempt it out of me after a couple four beers.

BECAUSE the topic of this post is Kenneth Sherman, the author of a book of literary criticism published by Porcupine's Quill  in 2009 that has been woefully ignored.

Sherman's book is What the Furies Bring (Porcupine's Quill, 2009), and as far as I can tell online it's been reviewed sparsely:
See also:
I read this book last fall, and I can only confess now that I cannot do it justice. So I will begin with the trivial: This book contains no essays on Canadian literature. Is that, perhaps, the reason for the resounding critical silence?

On the one hand, I would have liked to have read Sherman's commentary on Margaret Atwood's writings. Sherman has collected  remarkable selection of essays on (post)apocolyptic writing. Elements of Atwood's ouvre certainly fit within this subject. I experienced Sherman's lack of engagemenet with Atwood as a loss.

On the other hand, I deeply appreciated Sherman's engagement with the wide variety of subject matter that he does present. The book is, in part, a response to 9/11, but it is much more. It is proof that one can read deeply in the 21st century. That there can be continuity within contemporary life with deep subject matter. That our literary inheritance offers more than gossip, subjective gotcha reviews, and despair.

For example: Read and weep (and laugh)

Here is a quotation from Michael Greenstein's Toronto Star review:

Allusive yet restrained, Sherman's poetic voice engages well-known writers, such as Primo Levi and Anne Frank, and more obscure figures, such as Nahman of Bratslav and Varlam Shalamov, whose stories of the Soviet Gulag make him the "poet of the frozen Inferno."

The cover image of this book, based on George Raab's etching Lone Pine, tells us much about the style and substance of these essays. Bare horizontal branches of a solitary tree reach out, as if seeking companionship; like a work of sculpture, the pine is defined by the spaces between its branches. Although the landscape of this stark image is set in Ontario, the scenery has universal ramifications.

In similar fashion, Sherman's lyrical essays define and are delineated by bleak landscapes and by other writers who have witnessed and survived the Holocaust or Stalin's death camps. Each essay is a quiet dialogue with the dead, who are resurrected on the page, while the reader listens to the conversation between the essayist and his subjects.

This book shows that however much criticism in general may suck, its supposed decline is not yet fatal. It is a book that ought to tempt every reader with literary aspirations, everywhere.
Posted by Michael Bryson at 8:42 PM 1 comment: