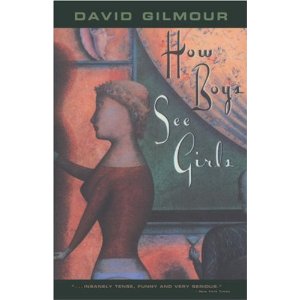 [Review originally published in Imprint, University of Waterloo, January 10, 1992. This is only the second book review I ever published. It's a document of its time. Lightly edited below.]

Mordecai Richler, to his credit, knows a good line when he sees one. In two of his essays, written 20 years apart, he recounts Hemingway's opinion of Henry Miller. Miller had once got laid in the afternoon and thought he'd invented it, said Hem. And, depending on which of Richler's essays you read, so have certain other fools who spout off about the originality of their sexuality.

David Gilmour, the CBC's film critic and second-time author, to his credit or not, has reinvented Henry Miller with his novel, How Boys See Girls. While there is nothing terribly original in love, sex, suffering, and ecstasy, the novel is a reminder of the chaos of trying to put together an eventful love life. The accompanying joy when it succeeds. The horror when it fails. And the need simply to get on with life when it's all over.

Gilmour dodges the question deftly, and the book sparkles because he does it so well. Holly, the love interest, is portrayed with sympathy and understanding. A high school dropout, she wants to go back to school. "'Do you know how attractive you are?' 'I'd trade it for a good job,' she said." She is a long way from one of Miller's "cunts."

The tension in the novel is generated not out of Bix's need to dominate his partner, as will Miller, but out of that genuine need for fulfillment through copulation. Bix is head over heels in lust, and the novel, as tenderly and sweetly as is probably possible, turns his graphic desire into art:

I stopped at the cluster of street vendor tables ... when a couple of tables away, a girl in a red sleeveless shirt lifted a bare arm and unconsciously, almost sleepily, scratched the damp hair underneath while she talked absently to a male customer. I stood transfixed, in a kind of nauseated trace. I wanted to put my tongue there; I wanted to hold her wrist over her head and lick the sweat from under her arm; taste the salt on my tongue. I wanted to lead her to the restaurant ... bathroom across the street and do the most extraordinary things to her.

And he eventually does. But could Miller have written this?

I put my tongue on her again. Don't think about making her come, I reminded myself. Just taste her, smell her, think about nothing else. A Zen blow job, as it were. When her breathing came faster and faster I ignored her. I maintained the same pace, like a robot tennis player. Indefatigable. Don't aim for the finish line. In a Zen blow job, there is no finish line.

No, Miller was too obsessed with his own transcendence. And there the difference lies (no pun intended).

It was simply nightmare mindboggling, the enormity of it, a kind of wrecking ball right in the nuts.

It is entirely possible that Gilmour may find himself the centre of a discussion on gender power politics with the publication of this novel. How boys see girls, after all, is said to be at the root of many of our social ills. Gore Vidal, for example, has said, "Henry Miller, Norman Mailer, Charles Manson ... a logical progression." Well, you know.

(Bix on his ex-wife): "Margaret believed, sometimes it was her undoing, that if you ignored unpleasant traits in people you liked, they got better."
Posted by Michael Bryson at 6:48 PM