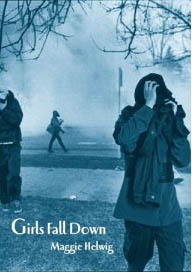 It's the beginning years of the new millennium as the book opens:

The city is a winter city, at its heart. Though the ozone layer is thinning above it, and the summers grow long and fierce, still the city always anticipates winter. Anticipates hardship. In the winter, when it is raw and grey and dim, it is itself most truly.

People come here from summer countries and learn to be winter people. But there are worse fates. That is exactly why many of them come here, because there are far worse fates than winter.

It is hard to imagine this city being damaged by something from the sky. The dangers to this city enter the bloodstream, move through interior channels.

Girls fall down on subways, remembering the smell of roses before they collapse. Was it poison? They don't die, but they are the seeds of a growing fear. The War on Terror isn't named, and historical context is generally ignored. The Toronto of this book is a Toronto with ravines, subways, and streets like the "real" Toronto, but the geopolitical details of the early-21st century are ignored. There is no Bush, for example. No 9/11. Still, the atmosphere and mood undergirding all of the events of the novel is one of ever-expanding fear.

The atmosphere of the novel is a major feature, and a major accomplishment. The plot is simple. It features a triangle between a young man, a young woman, and her brother. All are thirty-ish.

The man, Alex, is a photographer with a degenerative eye disease. He's slowing going blind. The woman is Susie-Paul, who knew Alex when they were undergraduates, but then she "disappeared" for a decade, and they are reunited just as the girls start mysteriously falling.

Susie-Paul's brother is Derek, who is schizophrenic, and missing. Susie-Paul is desperate to find him. Alex assists. Along the way, they hook up and rekindle the complexities of their connection a decade earlier.

Helwig's prose is confident, direct, searing, and multi-voiced. It's excellent, in other words.

As the opening paragraphs quoted above show, parts of the novel are written by a narrator with a broad view and deep insight. These sections offset the third-person narration of the plot-driving portions; the sections about Alex, Susie-Paul, and Derek. Then there are sections that point the camera in random locations around the city, often focused on the behaviours of teenage girls. These bits are simply hilarious:

The first girl who fell, on the day it began.

She had come out of school with her friends, in her kilt and tie and red wool jacket, her thigh still feeling intangibly damp where the geography teacher had put his hand on it after class.

'Sid the Squid,' snorted Lauren as they walked down the steps. 'God, he's so gross. He's just made of gross. And his wife is a hog and a half, seriously, I mean, she weighs like a thousand pounds.'

'She totally could sink the Titanic with her ass. I'm not kidding,' said Tasha.

The strangeness of adults, their clenched little needs.

'I just feel so cheated,' Tasha was saying. 'Because every year after sports day they have pizza, like every year, and then our year we just have chips and Coke. Literally like a single chip each. And you expect you're going to have pizza, you know?'

In 2008, NOW named Helwig TO's best author. As perhaps you can infer from the maladies of the characters (degenerative eye disease, schizophrenia) and the image of the title, falling girls, this is a novel about social and personal disintegration. There are passages that question the solidity of identity. Isn't who we think we are just chemicals sloshing around in our brains? How can we say we "know" something when everything is always falling apart? Yes, the book has touches of DeLillo, but it's a tres contemporary Toronto book (not a US-lit knock-off), and it invites and deserves engaged Canlit contemplation.

Not all Canlit is focused decades backwards.This is a book concerned with what it means to live right here right now.

Alex has a project to take photographs of the city before he loses his sight, a kind of catalogue and capturing of reality. But it's a reality turned into images, a removed reality that their creator won't be able to access (see) once he's blind.

What of the rest of us? Are we watching? Paying attention? More than a little lost?

The city, says the God-like narrator (to be trusted? or feared?), "is a winter city, at its heart." Cold. Lifeless. Waiting, one hopes, for an eventual spring.

Posted by Michael Bryson at 9:47 PM