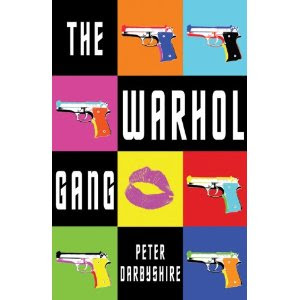 I reviewed that chapbook, and wrote:

Peter Darbyshire's contribution, "Paris Isn't a Love Story," injects both a masculine presence and a skeptical voice (as the title suggests) into the collection. Set in Canada, the story centres on a couple who are moving to Paris. Unable to take his gun with him, the husband gives it to friends who have dropped in to say goodbye. Paris is more distant in this story than in the others, both as a symbol and as an aesthetic influence. This story is distinctly American - somehow able to join Carver and Tarrantino.

While the other stories in this collection very near bleed Romantic transendence - i.e., Paris is a place where alienation is overcome - Darbyshire's characters do not overcome their silences. Springsteen sang, "There's a darkness on the edge of town." Darbyshire's characters live in that darkness, infected by the absurdities of the contemporary sit-com. On the way home the friends get stuck in traffic:

"Jesus Christ," I said. "Paris." I couldn't stop laughing. I reached into the box and took out the gun. Cait didn't say anything else, just kept on watching me.

Paris is a moveable feast. Its value lies in its flexibility, this collection shows. Three of the four writers here still find vigor in Paris's well worn metaphors. In Darbyshire's story, Paris is an unexamined "other". It is tempting to say if Paris didn't exist, writers would have to invent it. Then again, perhaps they already have.

None of that, however, prepared me for this new book, which must be one of the most accomplished satire's to come out of this country. The reviews so far have drawn comparisons to the works of Chuck Palahniuk, George Bataille and Kathy Acker, and I'm pretty sure I saw a review citing the influence of Orwell.

The blurb on the back cover from Lee Henderson raises the specter of Don DeLillo, and that's the name that kept returning to me as I read this book. DeLillo creates an eerie sense of a world not only gone crazy but heading for collapse. I'm thinking of White Noise, in particular. Orwell's world of 1984 is already over the edge. The world of The Warhol Gang is arguably over the edge, too, but I'm going to suggest its only an inflated version of our own late capitalism.

It's hyperreality, in other words, not something father (far) out (man).

I've always been skeptical of the idea of "late capitalism." Later than what? But I don't know how else to describe this book. It's like No Logo on acid. Darbyshire's knife is aimed straight at the heart of the marketplace. Everything in this book is commodified. The only logical conclusion I can think of for the society of The Warhol Gang is collapse. Does that make Darbyshire a Marxist? Maybe only a super smartypants.

The book is funny, disturbing, and has a great cover. People kept stopping me and asking what I was reading. Which is funny, too, given how central it is to the plot that everyone and everything is turned into a "product."

So what is the book about anyway?

A young man (nameless) gets a job at a market-research company. The company gives him a code name, Trotsky. This is the only name the reader knows him by. We know very little about his background. He is a university graduate in search of employment. His job prospects appear not too good. He is, in other words, very GenX. He is also, in other words, generic.

Winston Smith, the protagonist of 1984, we might note, was highly specific. It was his specificity, in fact, that got him into trouble with Big Brother. He wanted to be himself. He didn't want to be a cog in the wheel.

"Trotskty," on the other hand, doesn't have an antagonist. He's not fighting against evil. He is more like Gulliver on his travels. Lost in a strange land. Compared to Winston Smith, he is a child. (Hopefully its clear here that I don't mean in age; I mean in his thinking and actions. He's juvenile, narcissitic, incapable of connection to anything larger than himself, though he yearns for that something "more.")

The job our (anti)hero is given involves getting naked and sitting in a pod (I imagine it like a tanning bed). Images are projected onto the inside of the pod, partly controlled by the mind of the person in the pod. The images are of products that don't yet exist. The company is attempting to get ahead of the consumer demand curve. Or it's trying manufacture the consumer demand curve. Or its just manipulating the hell out of consumer behaviour.

Exposure to the images in the pod deteriorates the protagonist's mental health. The experience has a similar effect on the other characters who enter the pods. The connection to the essential self weakens. The protagonist feels that he is becoming the people he imagines himself to be while in the pod. The boundary between reality and fantasy blurs. See again the definition of hyperreality.

To reestablish the connection to "reality" (the only word Nabokov reportedly said should always include quotation marks), the protagonist is advised to buy stuff. This works for a while, then it doesn't. Influenced by a popular television program about violent accidents, the protagonist starts visiting real accidents. He watches people die. He intervenes, holds their hands, takes their keys and visits their apartments. He is aided in this mission by a police scanner, recommended to him by a mysterious stranger.

He meets more mysterious strangers and discovers that they are the "resistance." Later, he meets the leader and asks what they are resisting. Everything, is the answer. And thus also, nothing. There is an element of The Matrix in this section. The leader doesn't tell "Trotsky" that he's "the One," but that's what happens. The protagonist, through a series of accidents, enables the resistance to go big time. To get a better brand. The Warhol Gang.

In 1960, Philip Roth gave a lecture on American literature that was later included in Reading Myself and Others (1975). Roth said/wrote:

The American writer in the middle of the twentieth century has his hands full trying to understand, describe and then make credible much of American reality. It stupefies, it sickens, it infuriates, and finally it is even a kind of embarrassment to one's meagre imagination. The actuality is continually outdoing our talents, and our culture tosses up figures almost daily that are the envy of any novelist.

Few of today's serious writers could be thought of as realists in the strictest terms, our environment is so filled with fiction already -- television, advertisting, politics -- that life is a huge novel we're all living inside. The techniques of realistic fiction are simply not adequate to describe it. Only the resources of a fairly bizarre imagination and disturbed mind are capable of making sense of the world today.

In response to this point of view, Tom Wolfe published an essay in 1989 in defense of literary realism. The world wasn't any simplier in Dickens' day, he essentially said. The techniques of the realistic novel (and lots of on the ground research) are enough to suit any novelist worthy of the name.

Darbyshire has more in common with Ballard than with Wolfe, that much should be clear by now. We should note Ballard's comment (from 1988!) about how much of our environment "is so filled with fiction already." Darbyshire belongs with those novelists who are writing fiction about the fiction of our "reality." He is not, a la Roth, trying to make the world "credible." He is showing, among other things, how in-credible the world is.

How uncredible it is.

"Trotsky" doesn't get connected back to his essential self, but the idea of "return to the real" animates much of the action in this book. With its precursors (The Matrix, 1984), The Warhol Gang might be read as a story underlaid with a desire to "return to the garden" (i.e., Eden). If only we could get out of our hyper mediated "reality" and back to simpler times when ... what? Consumer trends weren't manipulated by market-research?

No. I don't think Northrop Frye could pin this one on The Great Code. For one thing, the resistance is corrupt. Not only does the Warhol Gang within The Warhol Gang erupt into a Charles Mansonesque fury; it also starts getting recruits to sign a contract and begins licencing its activities.

Again, this is a GenX perspective. There is no latent Sixties nostalgia here. The revolution ate its young long ago, and now you can buy the merchandise.

Ten years ago, I noted that Darbyshire's characters live in Springsteen's "darkness at the edge of town," "infected by the absurdities of the contemporary sit-com." In The Warhol Gang, Darbyshire has gone deeper and darker. It's a book that ought to frighten us, at least those of us not amusing ourselves to death.

I put this note below because it's in the nature of an aside. How does this book fit into Canadian literature? Note none of the references above cite anything Canadian.

Richler's Cocksure is the only "go to" book I could think to reference.

Elsewhere, I've noted the sad fate of satire in Canadian literature. We have no DeLillo or Ballard. (Or do we? Out there hidden and obscure.) (Does Cronenberg count?)

Which is strange in the land of McLuhan, Innis et al. Didn't Canadians invent media studies?

Ah, thoughts for another day. Right now, I think my mind is broken.
Posted by Michael Bryson at 10:52 PM