Leonard Cohen turns 75 on Monday, and I see from today's Globe and Mail that his two novels are being republished in a new, single-volume issue.

Below is a report from 2006, when he sang on Bay Street in Toronto with Anjani Thomas. 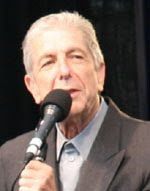 He came, he spoke, he sang, he joked, he smiled, he laughed, he recited poetry.
It began with Heather Reisman, Founder and CEO of Indigo Books & Music Inc., saying she was known around her corporation as "Chief Book Lover . . . but on this occasion, I'm just 'Chief Lover.'"
Reisman spoke shortly after 3:45 p.m. from a 20'-wide stage set up outside the Bay Street entrance of Indigo's Toronto flagship store. At 3:00 p.m., the police had blocked off the road at either end of the block and the crowd, which had been slow to gather, soon filled the street well over 1,000 strong.
Reisman introduced Ron Sexsmith and the Bare Naked Ladies. Sexsmith sang "Heart With No Companion," noting it was "one of my favorite Leonard Cohen songs." Sexsmith gave the song a strong and heartfelt rendition, a twinge of sadness in his voice, a seeming requirement of every Cohen composition.
Sadness was replaced with a complicated mix of camp and nostalgia when BNL's Steven Page followed Sexsmith with lead vocals on "Sister's Of Mercy." The Bare Naked Ladies and Leonard Cohen? Only in Canada, eh? Somehow it all worked fine. There was a keen "in-joke" quality to the performance, but a deep reverence also.
Reisman then returned to exhort the audience with the news that for the first time ever in Canada: "a poetry book is the number one best-seller!!!" The crowd cheered. The title was, of course, Cohen's Book of Longing (M&S, 2006), his first new title in over a decade.
Then there he was!

The crowd responded with sustained applause. Cohen: "I want to apologize to the pedestrians and the drivers for the inconvenience." He looked relaxed, pleased, slightly hunched. He recited a poem, then introduced Anjani Thomas and her band -- keyboard, bass, guitar -- and left the stage. Thomas, under the name "Anjani," has just released "Blue Alert," a CD of new songs, lyrics by Cohen with whom she has worked off and on since 1984 when she sang backing vocals on the Cohen classic "Hallelujah."
Thomas sang five songs from "Blue Alert." Her vocal styling was Cohenesque, if two voices remarkably different can be said to be remarkably similar. Thomas is heavily jazz-influenced, and she sang at times breathless like Billie Holiday, or Joni Mitchell. Chorus lyrics included: "thanks for the dance" and "saying goodbye at the innermost door." It seemed almost as if Thomas was Cohen's 21st century voice, delivering his goodbye as the poet/songwriter himself knelt at the back of the stage, hands clasped in front of him as if in prayer.
For the fifth and final song of her set, Thomas called Cohen to the microphone, but not before thanking the crowd for its "Canadian aloha." The Hawaiian native said, "In Hawaii, we take off our shoes, so I hope you don't mind."
Lyrics from the final song included:
You're my first loveand my last
there's no love after you
and
I had so much to tell you
but now it's closing time
the heart is always right
and
I never got to tell you
how beautiful you are
and
I don't know how it happened
but I missed the exit sign
it's dark out in Los Angeles
it's dark out along the line
and
I never got to love you
like I heard it can be done
the heart is always right
Is the heart always right? In Cohen's universe, the song and poem is a vehicle of purity in emotion. Back at McGill in the 1950s, Cohen had a country & western band. He must have learned something from Hank Williams early on and stuck with it. Ambiguity of expression is not a Cohen trademark. Recovering lost perfection is. Speaking with gratitude for what's lost is, too.
And so, Ron Sexsmith and the Bare Naked Ladies returned to share the stage with Cohen and deliver spirited versions of two of Cohen's better known "goodbye songs." ("Blue Alert" -- we were reminded sharply -- is only the latest in a long line of song/poetry cycles from Cohen that obsess about endings.)
Sexsmith and Page shared the microphone with Cohen. "I'll follow you guys," Cohen said, but soon the other two had maneuvered their elder into taking over lead vocals. And he smiled like he'd been reunited with "Suzanne." His voice raised on the lines: "you held on to me/ like a crucifix" ("So Long Marianne"). Should we let him go? No, the next -- and final -- song was "Hey, That's No Way To Say Goodbye."
[First published in The Danforth Review]
http://thenewcanlit.blogspot.com/
Posted by Michael Bryson at 7:43 PM