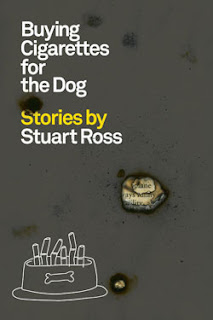 It's easy to misunderstand Stuart Ross.

When I say Stuart Ross, I don't mean Stuart Ross, the man, the individual, the writer, the poet, the blogger, the event organizer, the publisher, the person-who-does-things.

I don't know this Stuart Ross, whom I nonetheless believe exists.

Yes, I've seen him, or someone resembling him, or imitating him.

I've even reviewed a book purported to be by him. It didn't make a lot of sense, but I enjoyed reading it.

When I say it is easy to misunderstand Stuart Ross, this is the Stuart Ross to whom I am referring.

The Work. The Words On The Page.

As in, "So what do you think of the New Stuart Ross?"

One is perplexed by what Stuart Ross is up to, for example, in Buying Cigarettes for the Dog (Freehand Books, 2009), the author's new short story collection.

One cannot agree, however, with the last sentence in the book: "My stories are of no consequence."

These are stories of consequence. They're just easy to misunderstand.

In that review, she wrote:

The placement of unexpected things side by side is not only the spirit of surrealism but also the beating heart of both comedy and nightmare, and Barthelme's work, despite its seemingly offhand oddness and its flouting of conventional storytelling, was capable of suddenly cohering in the marvelous way of Kafka.

She also noted that in Barthelme's writing ...

Conventional narrative ideas of motivation and characterization are dispensed with. Language is seen as having its own random and self-generating vital life, a subject he takes on explicitly in the story "Sentence," which is one long never-ending sentence, full of self-interruptions and searching detours and not quite dead ends (like human DNA itself, with its inert, junk viruses), concluding with the words "a structure to be treasured for its weakness as opposed to the strength of stones."

Moore doesn't appear to be overly thrilled with the biography, but she does link some of Barthelme's genius to his geographic past:

He was a rainbow coalition ventriloquist and his denser stories perhaps gasp for air. That his first three decades were spent in Houston, a sprawling city without zoning ordinances and resplendent with surreal juxtapositions (billboards next to churches next to barbeque shacks), must have been a deep and abiding influence - though his early reading of Mallarme is usually given the credit.

When my five-year-old step-daughter asked me what I was reading, and I said it was called Buying Cigarettes for the Dog, she laughed loud and long.

[The previous book I read was Thought You Were Dead by Terry Griggs (Biblioasis, 2009).]

Stuart Ross is the editor of Surreal Estate: 13 Canadian Poets Under the Influence (Mercury Press, 2006). He may well be Canada's leading literary surrealist. He deserves more close reading than he currently gets. Donald Barthelme was a superstar. Stuart Ross is a small press racketeer (Anvil Press, 2005).

Poetry for an evening by the fireside with a bottle of wine. Poetry to be savoured, relished, enjoyed. Ross writes of hamburgers and history, of oceans and orphans, of sonnets and self-portraits with what appears at first glance to be humour, but underlying the piled on images is a realistic, often optimistic, view of the world. The prince will always kiss Sleeping Beauty into wakefulness, will always bring the glass slipper to Cinderella.

Ross links images in a dance of kaleidoscopic colour and shape while maintaining rhythm and the cohesion of underlying emotion with serious impact. He gives a sense of adventure and wonder to each page; the reader can never be sure what might happen next.

Like I said, it's easy to misunderstand Stuart Ross.

The reader can never be sure what might happen next in the stories in Buying Cigarettes for the Dog.

One reason for that is the placement of unexpected things side by side. Another reason might be because Ross is a resident of a sprawling city ... resplendent with surreal juxtapositions [but, yes, Toronto has zoning by-laws].

There are other reasons, too, for Ross's literary peculiarities. One might find some possibilities by looking at what Wikipedia notes about Kafka's writings: "Themes of alienation and persecution are repeatedly emphasized."

Critics have interpreted Kafka's works in the context of a variety of literary schools, such as modernism, magical realism, and so on.[22] The apparent hopelessness and absurdity that seem to permeate his works are considered emblematic of existentialism. Others have tried to locate a Marxist influence in his satirization of bureaucracy in pieces such as In the Penal Colony, The Trial, and The Castle,[22] whereas others point to anarchism as an inspiration for Kafka's anti-bureaucratic viewpoint. Still others have interpreted his works through the lens of Judaism (Borges made a few perceptive remarks in this regard), through Freudianism[22] (because of his familial struggles), or as allegories of a metaphysical quest for God (Thomas Mann was a proponent of this theory[citation needed]).

Stuart Ross is not just strange and awkward. He is often profound.

Biographers have said that it was common for Kafka to read chapters of the books he was working on to his closest friends, and that those readings usually concentrated on the humorous side of his prose. Milan Kundera refers to the essentially surrealist humour of Kafka as a main predecessor of later artists such as Federico Fellini, Gabriel García Márquez, Carlos Fuentes and Salman Rushdie. For García Márquez, it was as he said the reading of Kafka's The Metamorphosis that showed him "that it was possible to write in a different way."

Ross is widely read and admired within the tight circles of Canada's small press readership.

It's everyone else who needs to wake up and get some learnin'. Something along the lines of it's possible to read in a different way.

That is a matter of not insignificant consequence.

I haven't said much about the specifics of the stories in Ross's new book. I find that I don't want to. I want you to discover them for yourself.

You will misunderstand them. I can almost guarantee it.