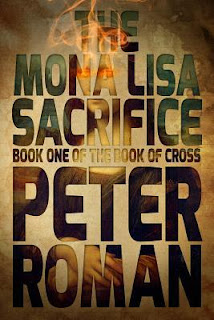 Peter Roman's The Mona Lisa Sacrifice (CZP, 2013) is the first novel I've read that made me feel like I was playing a video game.

Maybe it was the protagonist, who kept dying and coming back to life, fighting assorted demons (and angels) and progressing to higher levels of complex game play.

But the protagonist isn't Super Mario; he's Jesus Christ. Or at least the soul who inherited Christ's body. Confused? So is he. His name is Cross, as in the Cross, but also angry.

Cross has the biggest case of amnesia in history and a unique problem. He can't die. He wakes up in a cave, rolls away enough of the rock to squeeze out. He has vague memories of being crucified. He remembers his enemy, Judas. No Prince of Peace, he's pissed off.

Over the next two thousand years, he drifts around the world indulging the body's cravings (often simply described as wine and women), fighting in the Roman Coliseum, with King Arthur's Knights, against assorted knaves, rogues and rascals. He has a burning hatred for Judas and a permanent existential crisis. He cannot erase himself (he dies repeatedly, only to dig himself out of various graves). He is propelled forward for a desire to know himself (though he's not much for philosophy) and a desire for revenge (he's convinced Judas is the cause of his fate). Judas, it must be explained, is a lot like Lucifer; he is no mortal; he morphs throughout history, often placing himself at the site of catastrophe and chaos (e.g., Hiroshima et al).

The background of the story is Christ withdrew to Heaven and God withdrew from the world. Judas, essentially, inherits the earth, except he hasn't achieved the complete Doom's Day he expected either. Angels remain, abandoned by God, awaiting his return. A host of other magical creatures also exist, each with different agendas.

Cross is like Moses in the desert, cast out, wandering. How can one not quote Bob Dylan? "Like a complete unknown/ Like a rolling stone." He hunts angels for grace. He kills them and sucks out their power, which restores him. If he died low on grace, he would still be restored, but it would take longer. Being stocked up on grace also allows him to perform magic of various sorts.

While the context-setting is complicated, the plot isn't. The story opens with an angel offering Cross a bargain: find the Mona Lisa (the real Mona Lisa, not the painting) and he will be given Judas. And since his search for Judas is one of the few things that have kept him going for the past two thousand years, of course he says yes. He would do anything for that. And what follows is a series of the odd and improbable. It's also a love story. And everything wraps up tightly, while also setting us up for the sequel.