Life Is A Carnival

Believe it or not.

Posted by Michael Bryson at 12:20 AM No comments:

Email ThisBlogThis!Share to TwitterShare to FacebookShare to Pinterest
Labels: video

In his TDR interview, Derek Hayes describes the characters in his short story collection, The Maladjusted (Thistledown, 2011), as people "who suffer from anxiety or whose thinking is a bit distorted."

My Oxford Concise dictionary defines maladjusted as "(of a person) unable to adapt to or cope with the demands of a social environment."

Judged by that definition, Hayes' description of his book is bang on. This is not a noir collection of stories about people from the wrong side of the tracks or an exploration of marginal sub-cultures. These stories are character sketches of people who view reality through a prism slightly (or more) askew.

Now everyone's perspective is different, so what I'm trying to get at here is more than simply subjectivity. What Hayes' characters have, rather, is a self-awareness about their relationship with others and how a conflict within themselves prevents them from sharing common ground with others, or connecting deeply with others, or feeling "a part of it" (feeling apart from it), or being able to manage, per the dictionary definition, "the demands of a social environment."

Yes, there is a David Foster Wallace-ness to these stories, though Hayes' characters are more ... what should one say? Real? Less extremely different, perhaps?

The Maladjusted packs 16 stories into just over 200 pages. The stories also take place around the globe and the narrators speak a multitude of voices: different races, different genders, different ages, different intellectual and emotional capacities.

The diversity of the collection is abundant and rewarding, and the ease of the storytelling is deceptively simple, though the stories are often anything but.

A debut collection worth checking out.
Posted by Michael Bryson at 7:55 PM 1 comment:


It all stared with Hemingway, with the self-conscious literariness of the short stories, with the iceberg comment, with show-don't-tell and A Clean, Well-Lighted Place and Hills Like White Elephants.

I was taken with the idea that the author could provide, say, 10 per cent of the story (the iceberg above water) and leave it up to the reader to fill in the rest. The story would be like a painting, requiring engaged interpretation, not simply an exposition stuffed with all possible details, which is what Dickens seemed to me, over-written nonsense.

Later, I would read in A Moveable Feast how Hemingway's style evolved from viewing the suggestive brush strokes of the Impressionists, and the circle of influence grew tighter. Impressionism is what I thought art should be. But then I was a teenager and listened to The Doors.

Break on through. Capture the small, essential granules of life.

Over the years, I've tried to unwind Hemingway's influence on my reading habits. I've broadened and complicated my views of what a short story can be. I've noted the limits of the Hemingway style, how minimalism can be a trap, how the heroic, the depressive and the male ego mix in Hemingway in sometimes destructive ways.

But even after all of that, it's where I've chosen to start what I hope will be a series of reflections on different short story authors and books, a random flowering of opinion and fact.

When I first read Raymond Carver, Short Cuts, I saw how he had taken Hemingway, added some Kafka, and revealed new textures of storytelling. Story making. So Much Water So Close To Home, for example, has a title that sounds like Hemingway. The minimalist style forces the reader to interpret "what's missing" in order to make sense of the action, the story also critiques the male ego and introduces a female voice in a way Hemingway could never quite provide.

So Hemingway is still part of the foundation of my reading experience, but also I look for writers who can breakout of the perspective of the Hemingway experience and put their own stamp on "reality."

Which is something I'll get to later, the whole question of whether language can refer to anything other than itself and the struggle between the realists and fabulists. Which may not be a struggle at all, just different points on a storytelling spectrum with no contradiction inferred between them.

For now, though, I salute Hemingway and his declarative sentences. They are built to last.
Posted by Michael Bryson at 11:07 AM 1 comment:

Go to this page on the CBC website, then under "display" and "all genres" change that to "fiction-short."

And you will get a pretty good list of recent short fiction in Canada (from Quill & Quire reviews).

Cheers.
Posted by Michael Bryson at 10:51 PM No comments:

Ralph Ellison and Fussing about the Novel 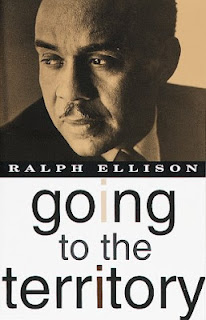 Hospital waiting rooms aren't good for much, but they are places to pick up miscellaneous magazines.

And so it happened that this week past I acquired a copy of the January 12, 2012 New York Times Magazine, which includes an article by Garth Risk Hallberg titled "Why Write Novels at All?"

The past few weeks I've also been reading Ralph Ellison's essay collection, Going to the Territory, and the recent issue (#84) of Canadian Notes & Queries, which contains much of interest, but the essay I'm going to reference here is by Patricia Robertson and called "Against Domesticated Fiction, or The Need for Re-enchantment."

I also see the Douglas Glover has added an online summary of DG sources on how to write a novel.

Personally, I have no idea how to write a novel, and I don't have a locked-in view that novels should be any one way or another. Except that they should not be simple; they should not be cliched; they should challenge the reader and provide evidence of an originality of style, voice, technique and/or point of view. We don't need novels that sound like other novels or stories that replicate other stories.

In The Art of the Novel, Milan Kundera argues that novels should do what only novels should do. That is, now that we have TV, movies, radio and a host of other media, what is special to the novel?

Ellison's view (from "The Novel as a Function of American Democracy") is that "the novel has always been tied up with the idea of nationhood. What are we? Who are we? What has the experience of the particular group been? How did it become this way? What is it that stopped us from attaining the ideal?"

On Henry James, Stephen Crane and Mark Twain, Ellison says, "In the works of these men ... the novel was never used merely as a medium of entertainment. These writers suggested possibilities, courses of action, stances against chaos." "The novel functioned beyond entertainment in helping create the American conception of America."

To Canadian readers, this mission might sound familiar; it might remind us of the nationalist mission of the 1970s, that the primary job of Canadian writers was to define Canada. That is, it might seem a corporate mission rather than an individual mandate.

However, Ellison is at pains to repeatedly stress that writers ought to position themselves within the tradition of great writing first and foremost, and they need to avoid the swamp of the sociological "we." Ellison tells us he took his inspiration from Joyce, Eliot and Pound (as well as Twain, Hemingway, and Emerson) and claimed the pluralistic culture of America as his own well spring.

Repeatedly, he says that Americans are both black and white, European and African, in their cultural influences and it is not race or blood that defines an individual's culture or talent. It is individual force of will and self-education of all of the best and broadest of all of the world's cultures. But, for him, there is also a signature document: The American Constitution. Ellison's narrative of the evolution of the novel is bound up with the 18th-century celebration of the individual and the break from the British Crown. It is also bound up in the failure of that promise in the form of ongoing slavery, leading to the Civil War, and then the failure of the Reconstruction.

Ellison's claim is that it is the novel's job to help America complete its promise, and assist the creation of a new consciousness of the individual beyond the boundaries of race, social class, or other cliches. His essays make for stirring reading, and they remain surprisingly contemporary. One might say that they even foreshadow Obama, and also the failure post-2008 of a post-racial cultural revolution to take hold.

In the NYT Magazine, Risk Hallberg writes about what he called the Franzen Generation and a literary conference in Italy in 2006 called Le Conservazioni, rich with YouTube links.

The Franzen Generation consists of Jonathan Franzen, Jeffrey Eugenides, Zadie Smith and David Foster Wallace, and their common element, says Risk Hallberg, is that these writers have made making us feel less alone the primary purpose of their fiction.

The focus, in other words, has become hyper-individual as the post-modern experiments have taken away our ability to agree on a common, stabilizing reality.

Risk Hallberg concludes that this approach "won't quite be enough" to ensure that "art is to endure."

The history of Western literature shows a movement downward through society from royalty to gentry to the middle classes to the lower classes to the dropouts; inward from heroic action to social drama to individual consciousness to the subconscious to the unconscious.

And the problem, says Robertson, is that "we have nowhere further to go."

At this point, I hear Ellison harking back to 1776 and the documents of the Founding Fathers. There were promises stated there that remain unfulfilled. There is an unfinished revolution that is still ripe with narrative. The financial collapse of 2008, for example, writ large the failure of American capitalism to deliver on the promise of a perpetually renewing middle-class dream. The poor got poorer and some of the rich went bankrupt, but very quickly the political and economic elites rushed not to fix the system, but return it to the status quo as much as possible.

Going forward, the crash of 2008 may affect more lives and be a more defining early-21st century moment than even 9/11. And we need our writers to grasp that.

Patterson echoes some of Ellison's moral vision. She calls on writers to "revivify old forms by using our imaginations in the service of new stories. In doing so," she says, "we will reclaim the essential role of the storyteller, the one who reminds us who we are and where we came from, and who restores the world through authentic story."

Actually, that sounds a lot like Ellison, doesn't it?

I look forward to reading the novel about Fort McMurray, Alberta. That's an epic awaiting its Balzac.
Posted by Michael Bryson at 2:23 PM No comments: