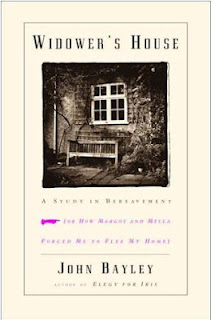 Widower's House: A Study in Bereavement (or how Margot and Mella forced me to flee my home)
by John Bayley
W.W. Norton, 2001

Deep in his narrative, John Bayley confides: "The bereaved should maintain at all costs the privacy and, in their own eyes, the singularity of their status. A privilege not to be transgressed."

Pages later he writes: "Being a widower had turned me into a monster of egoism."

The back cover proclaims: "A book to be given to anyone dealing with the catastrophic loss of a loved one."

Having recently suffered the catastrophic loss of a loved one (my wife), I disagree.

I disagree with the subtitle. This is not a study in bereavement. It's a study in John Bayley's bereavement, and not really that either. It's well told, written by a highly intelligent and clever man, who is able to generate significant narrative frisson by taking a passive approach to his situation.

Forced to flee? Even Bayley knows that's not true. He ran away. Not a strategy he recommends, no, but not either a strategy outside his character.

But these be quibbles.

I started with the chosen quotations above, because they capture something essential about the experience of catastrophic loss. Nobody else has the slightest idea what you are experiencing. Each grief is unique. You are alone, and there is no vocabulary for your experience before you find it for yourself. The uniqueness of your experience can make you a bore. Time to move on, isn't it? Nice to have you back. Move along now. Not sure what happened to your over in your little wonderland, but, chip, chip, tally ho, and all that.

Yes, the risk is you become a "monster of egoism," kind of like Hamlet.

Bayley neatly escapes that fate, turning a passive aggressive retreat into a premeditated conquest. He escapes the tragic ending by seizing the day. Good for him. And good for the book. The ending comes wrapped in a bow.

Part of my problem, of course, is that I'm 43 and suffered my loss in mid-life, and Bayley is a retired Oxford professor. I won't say that he doesn't need to worry about what to do with the rest of his life, but it's of a different scale now, isn't it? He's also without children, so can suffer his egoism without incurring too much penalty. For himself and (non-existent) others.

I had the same problem with a book I read this past Spring, which was about caregiving. The book was loaned to me, and I can't remember the title now, but some of it was excellent, and some of it was shite.

The excellent part was about giving in to the ego of the person who needs care. Let go. Do what they want. Make them comfortable. That's all that matters. Resolve your conflicts in their favour.

The shite part (for me) were examples of geriatric couples who were struggling with the fact that one of them couldn't do what s/he had used to be able to do before.

Once you've passed 70, I wanted to yell, what did you expect? This, to me, is unaccountable egoism. That you would think you could reach old age and not have to face death.

Perhaps I'm being unfair. Perhaps it's unrealistic to expect oldsters to be courageous. But, no, I don't believe so. I've known plenty of elderly with courage, and plenty of young without.

Perhaps this is what bothers me about Bayley's fleeing. He was heroic in caring for his dying wife, then he flees his house instead of informing a trespassing female that she needs to leave.

But it's the grief, of course. He's bereaved. He doesn't have the spine at the moment to do it.

Okay, I surrender. Life is hard. It's full of challenges. We can't surmount them all.

But existence precedes essence. You are what you do.
Posted by Michael Bryson at 11:03 PM No comments:

A choice quotation from that essay: "So far from being Shakespeare's masterpiece, the play is most certainly an artistic failure."

I cannot agree with that. Also, where the play rests within the hierarchy of Shakespeare's works doesn't interest me.

I was drawn to Hamlet, the character, because of the recent death of my wife. She died in May. I found myself ruminating on the Danish Prince and dug the play off my bookshelf. Only then did I realize why. The man is grieving.

Thus the artistic "problem" of the play. Called repeated to avenge the murder of his father, the King, Hamlet instead ruminates and delays.

Eliot: "We must simply admit that here Shakespeare tackled a problem which proved too much for him. Why he attempted it at all is an insoluble puzzle; under compulsion of what experience he attempted to express the inexpressibly horrible, we cannot ever know."

This is fine and true enough. However, Hamlet's deep plunges into his existential angst appear to tickle Eliot not at all.

Hamlet makes is directly clear what the problem is, "To be or not to be." This is often paraphrased, "On what grounds do I have to act?"

But Hamlet has no fear of action. He is decisive in escaping the pirates and re-writing the King's command, to cite one example. He is also well trained in swordsmanship and a well admired heir to the throne.

So why does he pause? What prevents him from taking his father's revenge?

I offer a small, personal reflection, based on the fact that I am about the same distance from my wife's death and Hamlet was from his father's, and that is this: the world is torn asunder and all one desires is a calm port.

Grief takes you away from yourself, and you need to constitute a new identity. A subconscious recognition of this is what drew me to re-read the play, I believe.

Hamlet could claim his rightful thrown and banish his confusion by killing his uncle, that is true, but the play, then, would not be a tragedy. If he acted quickly, it wouldn't even get us through the first act.

What we have instead is a meditation on existence that is of the first rank. Eliot, methinks, is mistaken.

Hamlet is too lost to constitute a new identity in the time available to him. He is overwhelmed and only too aware of the fragility of his own state.

Perhaps it's true that he enjoyed his walk on the dark side too much. Perhaps the sirens call him too strongly, and he cannot pull away. Because part of grief is a process of reflection and insight. Or it can be, if one lets it, and it can be overwhelming if one doesn't assert some control over it.

But grief overwhelms. It's what it does. And then one seeks again the surface.

Eliot cannot fathom Hamlet's dis-ease. From where I stand, Hamlet's problem is common.
Posted by Michael Bryson at 7:25 PM 2 comments:

Flaubert on the future

A couple of days ago I saw a replay of a CBC story about how India is trying to "count" its 1.2 billion people. Trying to give each one an official "identity."

It reminded me of something else I'd read recently, a quotation from Gustave Flaubert (from Flaubert in Egypt):

You won't believe that Max and I talk constantly about the future of society. For me it is almost certain that at some more or less distant time it will be regulated like a college. Teachers will be the law. Everyone will be in uniform. Humanity will no longer commit barbarisms as it writes its insipid theme, but -- what wretched style! What lack of form, of rhythm, of spirit!

For the past two months I have been dealing with the death-administration of my late-wife. I cannot tell you how insipid are the granular details of modern "identity." Just try cancelling a deceased person's Amazon account, for example. The great corporation initially sent me back a reply, asking if I was sure I wanted to cancel this account. If the account is cancelled, no more purchases will be possible.

What lack of form, of rhythm, of spirit!