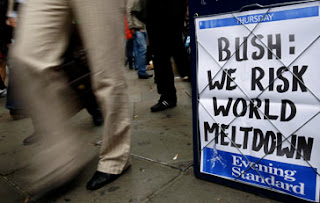 "No matter how they cast their ballots, all Americans can be proud of the history made yesterday," Mr. Bush said. "Across the country, citizens voted in large numbers. They showed a watching world the vitality of America's democracy and the strides we have made toward a more perfect union."

It's nice, sure, to see Mr. Bush find his gracious side in his final days in office, but this quest for America(n exceptionalism) to push towards perfection has to end.

President Elect Obama and his defeated challenger John McCain both agreed last night that "hope" and "optimism" are central to the American identity. Nice that they found something to agree about, but I'm waiting for the day when the President Elect says: "Americans are just the same as everyone else on this planet. No better, no worse. It's time we got used to that."

Anything else is an assault on reason.

My old friend Greg Cook used to argue that Americans have an unfinished revolution. (Well, you know. You better free your mind instead.) (Count me out/in.) I believe Greg was quoting Alden Nowlan when he said that. Perhaps not.

In any case, there's no intrinsic reason why government by the people for the people ought to seek perfection. Isn't that the goal of socialism?

There are loads of good reasons why perfection oughtn't to be the goal.

Some were abundantly clear in a documentary I saw last week: Trouble the Water. It's about a black family that survived in New Orleans through Hurricane Katrina in 2005. It's stomach churning. It's horrifying. It calls the lie to Obama's great line that there is not a white American and a black America: there is a United States of America.

Audacity of hope? Yes. Truth? No.

But today, let's just say congratulations, Obama, and echo Nelson Mandela: "Your victory has demonstrated that no person anywhere in the world should not dare to dream of wanting to change the world for a better place."

Better, but not perfect.

Media reports indicate that voter turnout in yesterday's U.S. election was the highest since 1964. News of a reengaged electorate is exciting and interesting. What it all means, I'm anxious to find out.
Posted by Michael Bryson at 7:33 PM No comments: