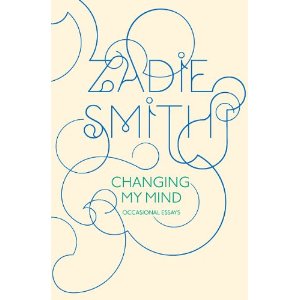 As it was, Zadie Smith's brilliant and diverse essay collection was published in 2009, and so can be read politically as an affirmation of the dude who followed dubya, the cosmopolitan Mr. Obama, who is sometimes derided as a waffler.

Smith doesn't celebrate waffling, but she does celebrate deep and attentive thinking. "For reasons that are obscure to me," she writes, "those qualities we cherish in our artists we condemn in our politicians" (142).

Quote: "Shakespeare's art, the very medium of it, allowed him to do what civic officers and politicians can't seem to: speak simultaneous truths" (143).

Quote: "From our politicians, though, we still look for ideological heroism, despite everything. We consider pragmatists to be weak. We call men of balance naive fools" (144).

Well, not all of us do, and not always, but point taken. Life, reality is mutable. The bards are more honest than the politicians. It is hypocritical, nay, dangerous, to seek purity in our politics or truth through ideology.

So, she takes us into the G.W. Bush era, after all. (Which for many, ahem, hasn't ended, and didn't begin with dubya, anyway.)

The book's seventeen essays are classified by five verbs: reading, being, seeing, feeling, and remembering. They are not, despite what might be suggested above, overtly political. The title, however, is well chosen.

Covering topics are diverse as film (seeing), David Foster Wallace (remembering), her father's D-Day involvement (feeling), her early engagement with Zora Neale Hurston (reading), and Mr. Obama and Shakespeare (being), Smith champions life as an engaged process. One with ebbs, flows, regressions, and, above all, change.

Lord, bless her. Early on, I discovered I needed to read this book pen in hand; all the better to put check marks in the columns where I wanted to shout out, "Right on!"

Smith is dedicated to the delicate, sophisticated, and precise. She is a detractor of the, well, fanatic. Here's a couple sentences from her essay on E.M. Forster:

To his detractors, the small, mild oeuvre of E.M. Forster is proof that when it comes to aesthetics, one really better be fagged: the zeal of the fanatic is what's required. "E.M. Forster never gets any further than warming the teapot," thought Katherine Mansfield, a fanatic if ever there was one (15).

In a terrific compare and contrast essay ("Two Directions for the Novel"), Smith shows what literary criticism can be and so often isn't, an opportunity to be open to different perspectives and not build up an argument on one side with the goal of eliminating any opposition.

The two novels contrasted in this essay are Joseph O'Neill's Netherland and Tom McCarthy's Remainder. Do these novels represent the two directions for the novel? The two directions or just two directions? They are two very different novels. They may even be, as Smith suggests, "antipodal." "One," she writes, "is the strong refusal of the other." But are they the only two paths novels can go by? Unlikely.

All novels attempt to cut neural routes through the brain, to convince us down this road the true future of the Novel lies. In healthy times, we cut multiple roads, allowing for the possibility of a Jean Genet as surely as a Graham Greene. These aren't particularly healthy times. A breed of lyrical realism has had the freedom of the highway for some time now, with most other exits blocked. For Netherland, our receptive pathways are so solidly established that to read this novel is to feel a powerful, somewhat dispiriting sense of recognition. It is perfectly done -- in a sense, that's the problem. It's so precisely the image of what we have been taught to value in fiction that it throws that image into a kind of existential crisis, as the photograph gifts a nervous breakdown to the painted portrait (73).

"A breed of lyrical realism has had the freedom of the highway for some time now, with most other exits blocked." Yummy. This sentence describes the state of the Canadian novel, and the above paragraph is stunning criticism calling out for mimics within the Canlit cosmos. Not a criticism of nationalism, but a criticism of form, style and content. One rooted in deep history and respectful of diversity of approach.

Meanwhile, anyway, and in any case (apologies for the diversion), it's a great essay.

Also recommended (worth the price of admission all on its own) is the elegy (strangely available on YouTube) to David Foster Wallace, who could not have asked (or dreamed or prayed) for a more sensitive reading of Brief Interviews with Hideous Men, which (unknown to me until this latest google search) is now a movie ("comedy, drama").

"Elegy" is my word. Within the essay Smith notes that she began writing it while DFW was alive, but the tone overall is elegiac. The tone avoids hagiography, but the sensitivity of the reading Smith presents makes clear her respect for her late-colleague.

The capital-T Truth is about life BEFORE death. It is about the real value of a real education, which has almost nothing to do with knowledge, and everything to do with simple awareness; awareness of what is so real essential, so hidden in plain sight all around us, all the time, that we have to keep reminding ourselves over and over: "This is water. This is water." It is unimaginably hard to do this, to stay conscious and alive in the adult world day in and day out.

DFW did, and Smith does. The evidence is on every page of Changing My Mind. I liked the essays about books and literature best. The rest were okay.

Smith writes about Nabokov and Kafka and much else. Here's one of the lighter moments: "It's a cliche to think liking Keats makes you cultured (Larkin and Amis defaced their college copy of The Eve of St. Agnes) ... " [and here she puts in a footnote: "Next to the phrase 'into her dream he melted' was written 'You mean he fucked her, do you?'" (24).]

I looked for a decent video of Smith to end with here, but didn't find one. So here instead is DFW.

Timing literature - especially fiction - to coincide with current events is a fascinating and tricky thing. Jonathan Franzen has an excellent essay about this in How to be Alone. Much like Wallace, he talks about how TV is taking over many of the responsibilities previously held by literature.

I too am working on timing issues - I'm trying to get my self-published book out! I have 20 days to go - follow the Hanlan's Point Project at www.jakebabad.com

another book blog, just starting, would like active readers to be associated
http://bookendsreads.blogspot.com/