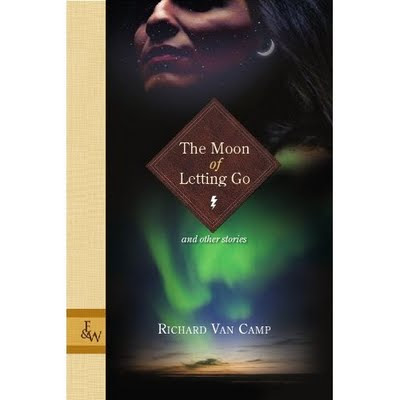 The Moon of Letting Go (Enfield & Wizenty, 2009) is Richard Van Camp’s second short story collection and his latest work to explore (in words borrowed from the back cover) "the notion of healing through individual and community bonds."

By which I assume the publisher meant "good sex and big laughs," because that’s what these stories are about. They’re also about honouring the "magic" of stories in those old time Indian ways.

I know some readers may stop at this word, "Indian," finding it incorrect. But I have chosen it deliberately and use it with the deepest respect. The alternatives – Aboriginal, Native, First Nation – do not convey the connotation I want.

I do not mean to convey the simplicity of stereotype or anthropological curiosity. I also do not want to convey a patronizing urban, modern smugness of knowledge about "the other."

What I want to convey is that while these stories depict contemporary situations, they also reach back to a mysterious kind of storytelling.

They honour the "magic," a word Van Camp uses in this book over and over.

Magic is something that cannot be explained; it is something by definition anti-modern, outside of reason or rationality. It operates by logarithms only understood by magicians. In this case, storytellers, of which Van Camp is clearly one.

Here is where I confess that Van Camp is also a buddy of mine. In 2007, he, Harold Hoefle and I took a trip to New York City. Richard and I went to Starbucks in Trump Tower. We walked through Central Park. We saw a punk band from mainland China play in a cave of a club in Greenwich Village (the opening band played Ramones covers; it was almost 1970s).

We also scooted all over town looking for Star Wars toys. We went to FAO Schwartz, one of the largest toy stores in the world, where Richard was unimpressed: "Is this all you’ve got?" He told me later: "You can get all that same stuff in Vancouver."

We wandered through Times Square, visited the World Trade Centre site, and went to the Museum of Modern Art, which had an airstream land yacht in the lobby (which reminded me of Ken Babstock) and an exhibit by Canadian photographer Jeff Wall. Walking around looking for a place for lunch, we passed HarperCollins. We took a group picture. Our future publishers, hey. (Give us a call, NYC!)

Okay, maybe this tangent into travelogue isn’t necessary, but the afterwords of The Moon of Letting Go includes a list of dudes who Richard says he "adore[s for] welcom[ing] me into the full grace of the blood in men." Harold and I are on the list. The fact that there is a list is testament to the type of man and the type of writer that Richard is. His stories are about "healing through individual and community bonds."

Hey ya hey. Let’s get on with this review.

The Moon of Letting Go includes 12 stories. The table of contents divides them into four sections: healing, medicine, teachings, and love. While this is a useful organizational structure, as a reader I found the categories blurry. Virtually all of the stories are about all four of those things, and more.

As that image indicates, these stories often juxtapose humour with a slow boiling terror. The reader is left with the impression of a community struggling to find the right way forward. A struggle that is especially evident among the young people. There is a reaching back to the past (the traditional ways) as a means to find a path to the future. It is a path lit by stories, lighted by storytellers. Van Camp himself is deep in this role, telling the stories of his people caught in a moment of tremendous transformation.

I saw Richard talk about his writing once, at a First Nations cultural festival at Harbourfront in Toronto, and he spoke about the stress of modernity on Aboriginal communities in the north. His stories attempted to capture that. I told him afterwards that I had seen Mo Yan say something similar about his work. It was about capturing the stress of modernity on rural communities in China. Yan had said he had learned to write about that partly from William Faulkner.

Strange connections? Not at all. I keep going back to Richard in FAO Schwartz, looking for Star Wars toys, and asking a clerk at one of the largest toy stores in the world: "Is this all you’ve got?" What would Faulker say? Maybe, "The past is never dead. It’s not even past." The future forces change upon us, and we must manage our legacies.

There’s a lot going on in The Moon of Letting Go. The stories are often fun to read. They are full of humour and optimism. But they are often raw, sexually explicit, darkly violent. The combination creates complexity – a high literary quality. The stories are not easily reduced or paraphrased. Ponder them with care.

With this book, Van Camp has continued to expand his vision and rededicated himself to an important project. Telling the stories of his people. Promoting the healing of individuals and communities. Creating literature worthy of readers, here, now, tomorrow, everywhere.

http://thenewcanlit.blogspot.com/
Posted by Michael Bryson at 11:17 AM